Real Estate Investors Flock to the Heart of Texas

Texas is Becoming the “Loan-Star” State for Investors

The San Antonio real estate market has become one of the hottest markets in the country and easily one of the best places in Texas to invest in real estate. The city’s growth and popularity comes from its fast growing economy, large military sector, a vibrant tourism industry, and strong retail and industrial presence.

Unlike other U.S. markets, the pandemic didn’t disrupt growth in San Antonio’s housing market. Like many other markets, demand outpaces supply, and median home prices continue to hit record highs.

The San Antonio Board of Realtors’ latest report shows the median home price increased 22% from 2021 to 2022 to $267,200. Even though home prices in San Antonio have increased quickly, the National Association of Realtors believes prices are still undervalued relative to underlying market fundamentals.

The National Association of Realtors ranked San Antonio as one of the top 10 “hidden gem” housing markets for 2022. As with nearby Austin, there are several reasons to invest in San Antonio real estate.

San Antonio features a lot of construction activity going on, especially in the multifamily market, where permits are up a whopping 86% YOY. Comparatively, the national average of multifamily construction permits increased 12% YOY, according to the NAHB.

San Antonio also had a relatively high number of fix and flips in 2021. Last year, 9.3% of the homes sold in San Antonio were flips, compared to 6.8% nationwide, according to Attom Data Solutions. Although rent has increased considerably, San Antonio is still relatively affordable. The average rent for a one-bedroom apartment in San Antonio is $1,098 – a 20% increase YOY. Most San Antonio renters – 47% – spend between $1,000 and $1,500 a month for rent, according to RentCafe.

Because of these factors, San Antonio is one of the best places to buy rental property. The stable market, surging home sales even with rising prices, and consistent inventory makes rental property in San Antonio a great option for real estate investors.

For those interested in investing in real estate properties, the San Antonio rental market is an ideal location for investors looking to branch into the Lone Star State. The city has a large military presence with Fort Sam Houston, Lackland Air Force Base, Randolph Air Force Base, Camp Bullis, and Camp Stanley located near the city limits.

This large military presence means a consistent pool of qualified, dependable residents who choose to rent instead of buy (because they’re likely stationed in San Antonio only for a few years before moving with new orders). This is music to the SFR owner’s ears.

Another reason San Antonio is growing and developing so quickly is because of its fast-growing job market. San Antonio boasts a sizable percentage increase of six-figure jobs compared to other Texas cities. Between 2015 and 2020, the metro area had a 163% increase in six-figure jobs and ranked #7 in the list of large metros with the most high-paying job growth over the last half decade. Six Fortune 500 companies call San Antonio home. Additionally, the now-closed Kelly Air Force Base was transformed into Port San Antonio, an aerospace and industrial park that provides as many high-paying jobs as the closed military base.

The Toyota Motor Manufacturing, Texas opened its San Antonio plant in 2006. The plant created more than 3,000 jobs. There are more than 20 on-site suppliers that created an additional 4,000 jobs. Suppliers like Green Metals, Inc., Metalsa, and Tenneco Automotive have added to San Antonio’s employment base while diversifying it beyond tourism and defense.

Why Investors Should Consider San Antonio

Investing in San Antonio real estate can be profitable for demographic reasons and because of steady appreciation rates.

San Antonio is a fast-growing city that literally cannot keep up with the population growth, keeping rental rates and property values high, which provides plenty of reasons why the San Antonio real estate market should remain strong for years to come. Finding a good San Antonio real estate investment opportunity is key to an investor’s success. When it’s time to finance your next investment, don’t choose just any hard money lender in Texas.

As experienced rental property lenders, Lima One Capital has the best rental property loans among private lenders for investors looking to purchase single properties or portfolios. We also provide a wide range of loans, including some of the best deals on bridge loans in Texas, and additionally have a myriad of investing resources available for your perusal.  Regardless of your investment strategy, we’re here to help. Contact us today to discuss your next deal, or if you have a deal in hand, you can speed up the process by applying now. 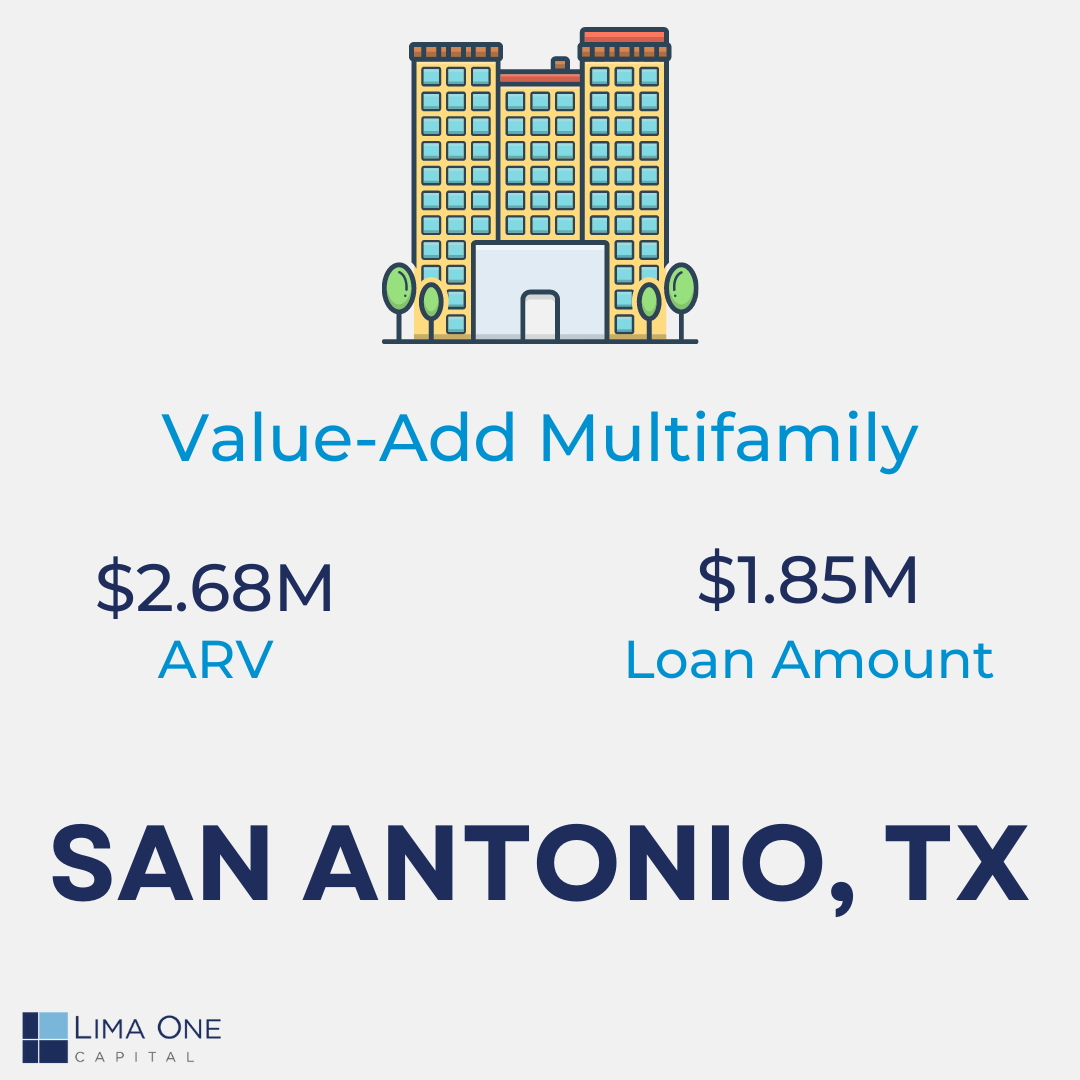 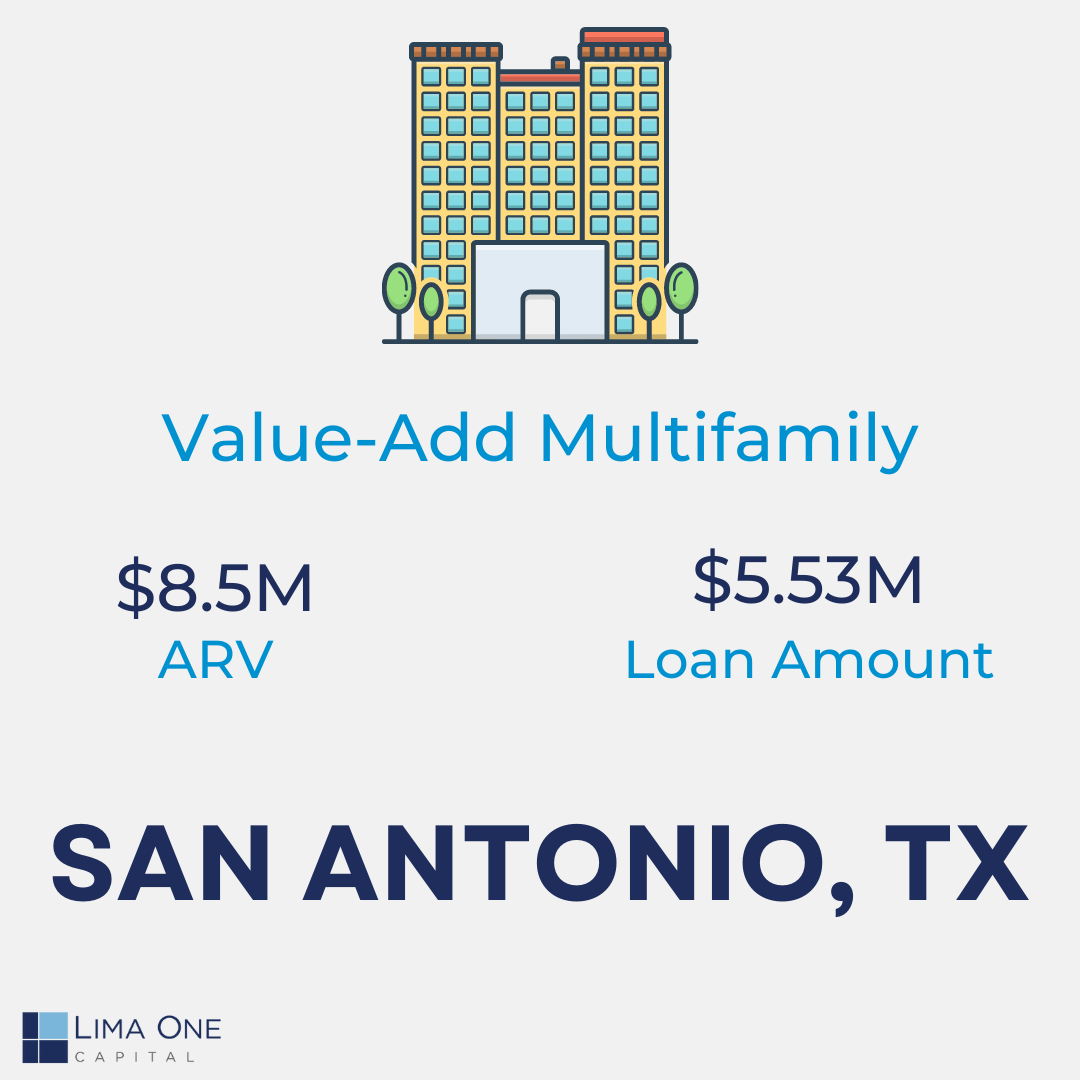